From the outside the house looked just like any other house, but inside there was a different world. A world of pain and pleasure, of lust and lacerations.
She was still fairly new to the place but they paid her well, so she did her best to satisfy every patron. On one uneventful Thursday evening, a mousy man descended the stairs into the dark basement. His legs visibly shaking, his hands squeezing a baseball cap in front of his groin.
“First time here?” she asked with a friendly but firm voice.
The man nodded, his gaze glued to the floor.
“It’s okay”, she continued, caressing the whip attached to her collar. “I’m not gonna hurt you… just close your eyes…”
Afterwards, as she was thinking about that particular man, she was surprised what a loud scream such a shy little man could produce.

It was the night of her friend’s end of summer party when she, by coincidence, met a rather charming man. Too many drinks were consumed and too many significant looks exchanged, so when the man whispered “I know a motel nearby… should we sneak out of here?”, she agreed without even realizing it.
After the intense 13.5-minute session in the shabby motel room, the man fell into a deep sleep.
As her tipsiness started to wear off, her curiosity started to get the better of her and she couldn’t help but to flip open the man’s wallet that was resting on the bedside table.
She thanked her lucky stars that the man’s driver’s licence was in the first plastic sleeve of the wallet so she didn’t have to invade his privacy more than that to at least know his name.
First her eyes locked on the man’s date of birth.
“Yikes, he’s twice my age…” she mumbled to herself. “No wonder it didn’t go beyond two puffs and a grunt.”
However, even more shocking than the man’s age, was his name.
“Oh, hell no!” she exclaimed a bit too loudly when she realized that the man was her friend’s father.
As the man started to wake up, she grabbed her purse and the first pieces of clothing she could reach and ran out of the dusty room. Luckily there was a taxi dropping off some drunk people at the same moment as she reached the parking lot.
“Hi there…” she said, breathing fast. “Umm… I need a ride.”
The cabbie leaned against the passenger side door and looked at her with a grin. “Hell, yeah! Hop on, babe!”
It wasn’t until the leather of the back seat pressed against her bare buttocks that she realised that she was wearing nothing but her sheer lingerie. 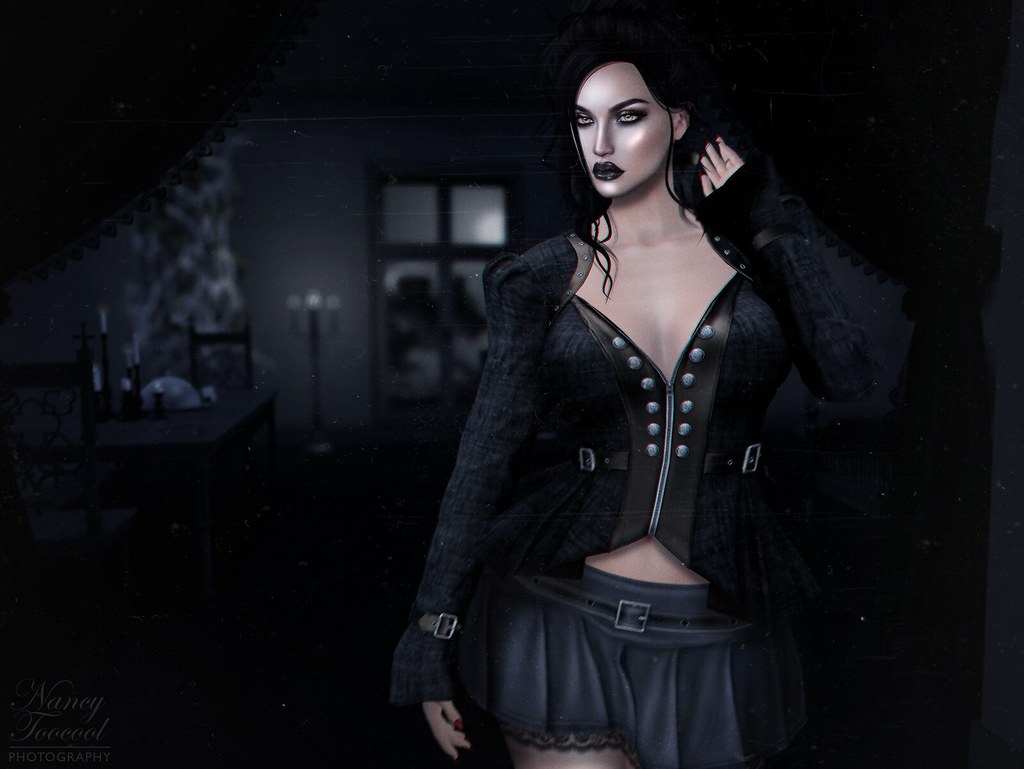 Every year when the autumn darkness fell over the town, guests of room 214 in the Silent Peacock Hotel either complained about peculiar disturbance at night or checked out without anyone seeing them. No one outside the room 214 had noticed anything out of the ordinary, but those who spent their nights inside that particular room were persistent that something was wrong.
“It sounded like someone was cackling inside the wall”, one woman had testified.
“I saw a female figure… or more like a shadow of one”, a certain gentleman explained to the hotel staff. His daughter also had said that a dark lady had carried her into the bathroom in the middle of the night.
And what about those who checked out without a word? No one knows. It seemed like they had vanished off the face of the earth.
Sometime in the late 1680s, a woman called Elizabeth had lived near the hotel’s current location. She was executed in Salem in July 1692. 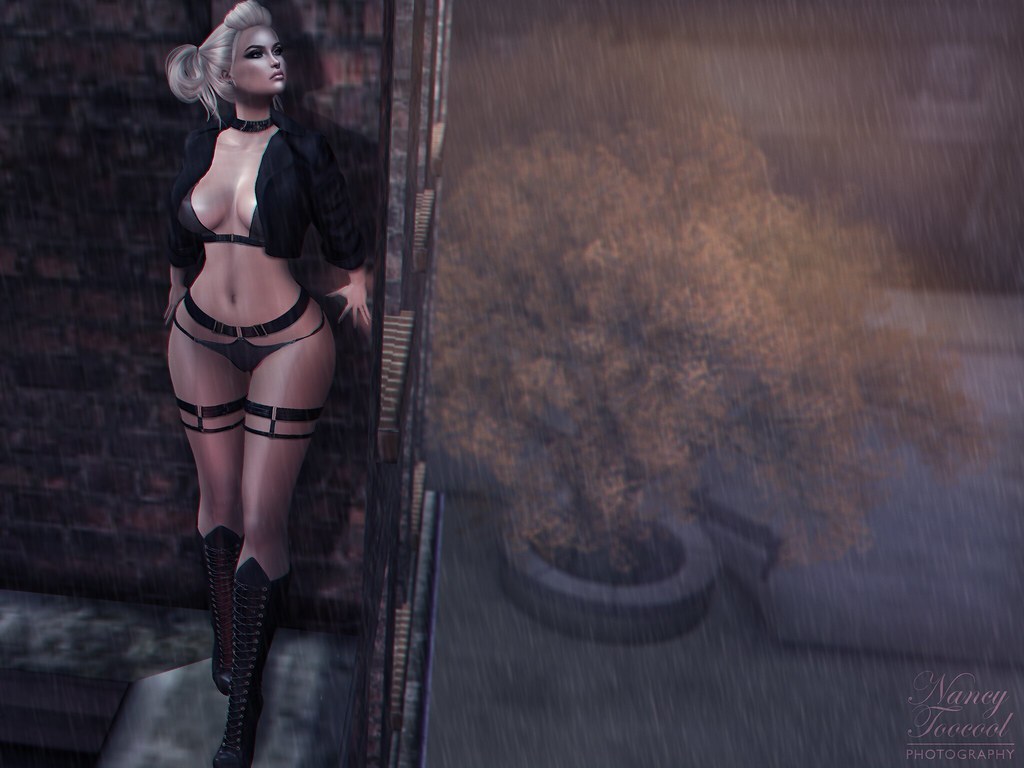 Two months earlier, a mysterious man had moved into the building behind hers. From her bedroom window she had been observing the man and his bizarre activities, the purpose of which she couldn’t fully comprehend (mainly because her view was occasionally obstructed by a piece of wall or half-closed curtains). She had, however, seen the man wash something frantically. Sometimes it had also seemed that the man was not alone in the apartment. Sometimes the man had been wandering about naked in the rooms of his new home.
When the night grew dark, she decided to finally take a closer look. She laced up her firmest boots and quickly threw some black clothes on. As she climbed onto the neighbouring roof through her fire escape, the sky broke apart and a freezing rain fell down on her, soaking the little outfit she was wearing.
She was determined not to give up and turn around, and so she soldiered on, sneaking across the rooftop to the corner of the building where the mystery man lived. She pressed herself against the brick wall. Breathing fast, she turned to look around the corner.
Her blonde hair was clearly visible in the stormy night that was lit up by a sudden lightning. The mystery man yelled something through the closed window, his voice inaudible. As for her, her life was never the same again. 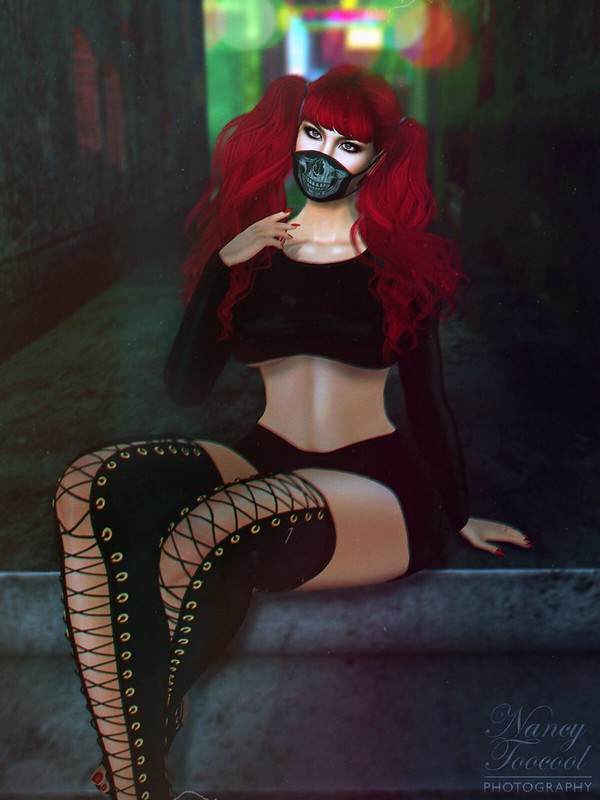 She was a dyed-in-the-wool city girl but her first trip to Hong Kong had led her to the underside of city life. It all started when she met (and yes, fell in love with) Yuddy, a hothead playboy who made his living by robbing small kiosks and seducing old widows. Nights with Yuddy had been hot and humid. The guy had a way of making it feel like the sun would never rise above Victoria Harbour.
“It’ll be an easy gig”, Yuddy had said after one of these endless nights. “They hide all their drug money in the backroom of this noodle shop. You just have to distract the cashier while I sneak in the back. You got just the body for it. Guys around here melt around western girls.”
She prepared well; slipped into her tiniest outfit and pulled her sexiest boots (that were still good for running) on. Did her hair in a girly way. Added tons of false lashes and eyeliner.
Funny enough, no one had told her that Su, Yuddy’s ex-girlfriend who was at least as hot in the head as Yuddy, would come with them. “I kind of owe her a few more gigs”, Yuddy had explained.
So before she even managed to make an eye contact with the noodle shop boy, Su had found an excuse to cause some drama with her in the noodle shop. Chairs were flying and she got to learn all the Cantonese words for a promiscuous woman.
“Fuck this”, she mumbled and ran off, not caring how Yuddy’s heist would go, or if she would ever meet the guy again.
As she hid in some dirty back alley that reeked of day old seafood, she decided that her days of being wild were over. 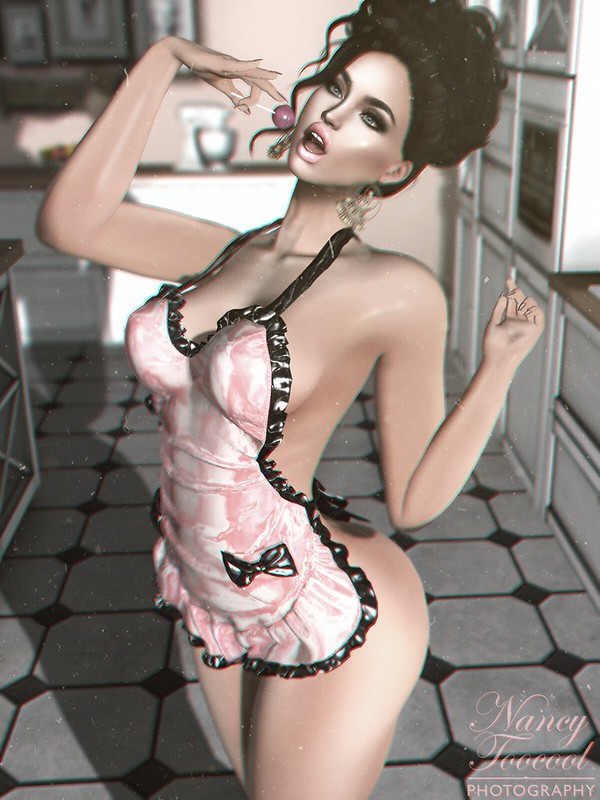 That day she woke up early to the sound of birds and the neighbour woman screaming on her front lawn (she had just gotten home from the local hellhole that didn’t close its doors until 5 am).
“Oh, what a beautiful day!” she said to herself as she walked from room to room opening the curtains. Outside her kitchen window the woman next door vomited into her own mailbox. “Today I’m going to clean the whole house!” she declared inspired by the drunk neighbour.
Forgetting to wear anything underneath, she tied on her latex apron and pranced back to the kitchen. “But first, mama needs some breakfast”, she giggled and opened the jar of pink lollipops that she always kept over the fridge.
She started to lick her unconventional breakfast, rolling the tip of her pink tongue against the hard candy. The sugary flavour dancing on her tongue put her in a certain mood. She slid the sticky candy down along her skin and giggled as she proceeded through her whole body, inch by inch, with the lollipop. The early morning sun caressed her sugary skin through the open window.
Her breakfast took longer than usual, approximately 47 minutes and 31 seconds. She blushed as she looked at the mess she had made with one simple lollipop. “Well… it was worth it…” she grinned as she licked her fingers.
It wasn’t until she fetched the cleaning tools that the man next door closed his living room curtains (and his mouth… and his zipper) and went outside to help her drunk wife. 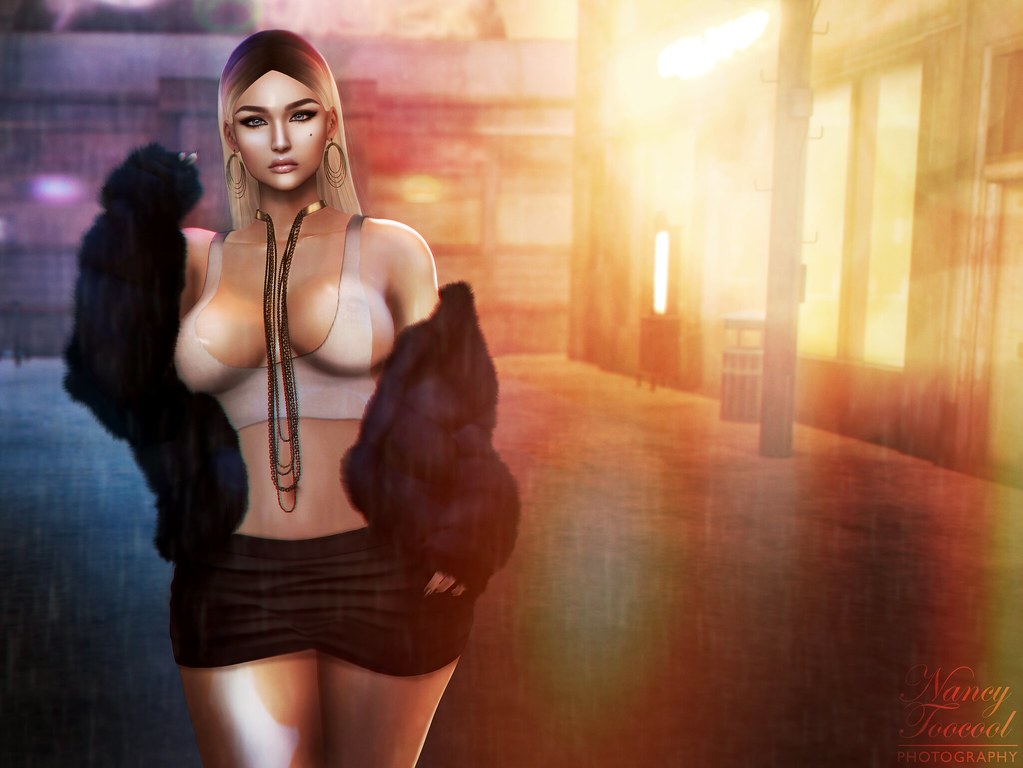 She had just left her last client of the night. The sky fell apart when she stepped on the street. Drops of water fell on her, gluing her hair to her cheeks and making her fur jacket weigh tons.
She skipped over the puddles that were gradually forming on the pavement, her leather skirt sticking to her thigh.
“Oh crap. If only she had paid in cash, I could get a cab”, she thought to herself.
The next day she decided to stop making house calls. No permanent was so urgent that her clients couldn’t wait 12 hours and come to her salon when it’s open. 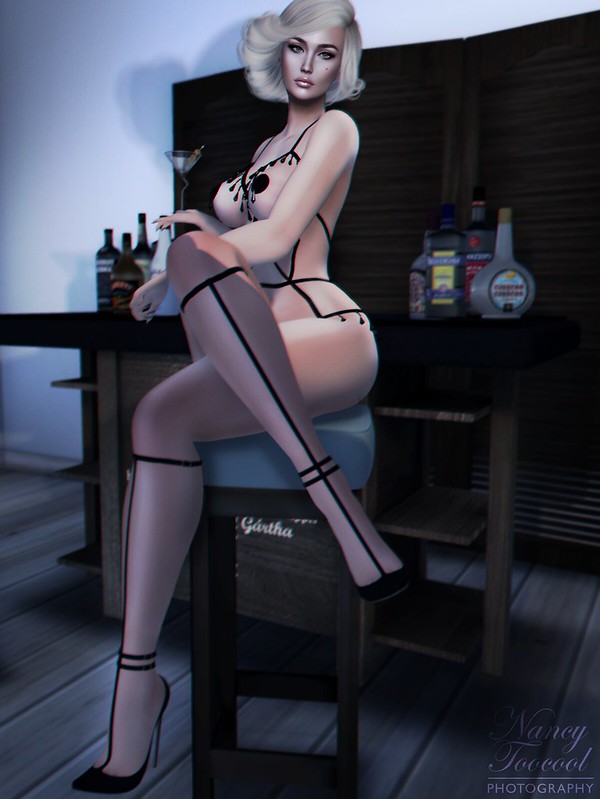 Her husband had been working hard all week, so when he told her that he was feeling sleepy, she told him to hold that thought. She skipped into her dressing room with a meaningful grin across her face.
Half an hour later, when she returned to the living room in her tiny little outfit, she found her husband snoring on the couch. She pressed her lips against the man’s cheek and inhaled his masculine scent before walking to their bar across the room.
After taking an ice cube from the mini freezer, she slid it along her collarbones and looked at her unconscious husband from over her shoulder.
“Too bad you’re missing the preshow”, she giggled to herself.
After placing several ice cubes, a generous pour of vodka, and a drop of vermouth into the cocktail mixer, she started to shake it hard. She felt the ice-cold metal of the mixer against her fingertips, creating small waterdrops that splashed on her chest. Her whole body shook to the rhythm of her cocktail making ritual, the beads of her outfit rattling almost as loudly as the ice in the shaker, her breasts bouncing wildly. She laughed loudly as she placed the cold mixer in between her breasts.
“What on earth are you doing, honey?” her husband mumbled from the couch.
“Oh, sorry! Did I wake you up?” she asked with an innocent voice. “I just wanted to make you a nightcap.”
After fully realizing what his wife was wearing and doing, her husband looked at her with love and lust in his eyes and leaped across the room to her. She giggled as the man wrapped his strong arms around her petite frame. Pouring drinks was difficult with an excited man having his way with her.
They ended up drinking martinis and making love for the entire night.